It may sound odd that nutritional deficiencies exist in modern America, but when you consider just two factors (so-called modern farming methods and processed foods) deficiencies abound. These often show up as sub-clinical syndromes that do not fall neatly into a narrowly defined diagnostic category. Chronic fatigue is a good example where thyroid function is normal on blood work and lab tests turn up nothing wrong but the person complains of no energy.

‘Modern Farming’ is the greatest misnomer of our times. The U.S. Dept. of Agriculture released a study not long ago that showed between 1966 and 1996 there was a net loss of nutrient content in food harvests of 25%. In translation, what this means is that even if you follow the food guidelines of 9 servings of vegetables and 4 of fruits a day you’re only getting 75% of the nutrition your grandparents ate.

Now comes Dow & Monsanto. Today’s food is riddled with pesticides, herbicides and toxins that are being sprayed in the thousands of tons per year on American farmland. And that’s just what is allowed by law. What’s not allowed by law (DDT and others chemicals banned by the EPA in 1972) are still manufactured and shipped to third world countries like Mexico, Peru, China, and Chile. These chemicals are used to grow food abroad which is shipped back to your local supermarket to complete what has come to be known as “the circle of poison.” 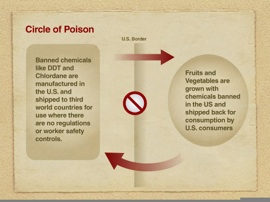 Processed foods have become what people just consider normal food now. Many families and individuals rely on prepackaged goods because they feel there is simply not enough time to prepare healthy meals. And this is just the tip of the processed food iceberg; we have not even mentioned fast food drive-thrus. Processing food does three major NO-NO’s to food: uses heat, removes nutrients, and adds preservatives.

Tissues and organs that have been damaged by the Standard American Diet (SAD) require concentrated organic whole food nutrition to provide basic nutrients back to what amounts to a starving body.

A ‘Starving body’ does not refer to the emaciated people we see on  TV during times of famine. Quite the opposite; starving Americans are well fed on the macro-nutrients (mostly simple carbohydrates and low quality fats, and proteins), but sorely lacking the micronutrients (minerals, vitamins, enzymes, cofactors, and unknown synergists only found in live food). In fact, the epidemic of obesity in America is due largely to the fact that Americans are overfed and under-nourished on too many processed foods.